The cars emerge out of the mist, seemingly forgotten creatures from another time, the black and white images making it easy to believe they are found photos from a century past. In fact the pictures were made just a few years ago, the work of photographer Mark Peacock who seized a moment of terrible weather at a race on a beach to remove the racers from the present and show them in an abstract and timeless landscape.

The race was intended to be a re-creation of ones that were held years past on the beach at Pismo, CA. The cars and bikes invited to run were all pre fifties machines and many of the racers were dressed for the occasion. It should have been two days of drags and socializing and enjoying the sun until a typhoon blew in, ruined most of the course, and made racing impossible - except for a small window of time on the first day. The racers made the most of it and for a few hours they dragged in the mist with the ocean at their side while Mark photographed the cars obscured and revealed by nature.

Mark Peacock photographs Americana. His work includes pictures of the neon landscape, carnivals, cars and motorcycles and the gently aged fabric of the American west. In an earlier life he was a musician and he has what seems to me to be a musicians understanding of composition and color. I like what he does. The pictures are expressive and impressionistic, the prints beautifully made. And while we are on the subject of prints, they are priced far below what you might expect. In a conversation with Mark I asked him why that was and he told me he thought it was important that anyone could afford to have one of these prints on their wall if they wanted it. I like that too.

I missed this show on opening night but encouraged by the fact it was mounted in what used to be an always open lobby of a beautiful downtown LA building I drove there one evening believing I could just walk in and see the show. Not so. In fact when I arrived the lobby was locked with the pictures visible but out of reach inside. I knocked on the door and Ray, the night doorman, came out to meet me. He told me that the lobby closed at 8PM nowadays and it was already later than that. But after a moment, seeing my disappointment, he welcomed me inside and invited me to look at the pictures to my hearts content. It can be interesting to talk with someone who is not there to see the show but working alongside of the art. Ray and I talked about the pictures in the quiet lobby and I learned some things about the show and the photographer and the space where it hangs and then I spent a half an hour uninterrupted absorbing the work as it was meant to be seen. I liked that best of all. 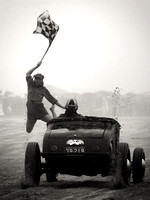