The First Place I Ever Lived in LA 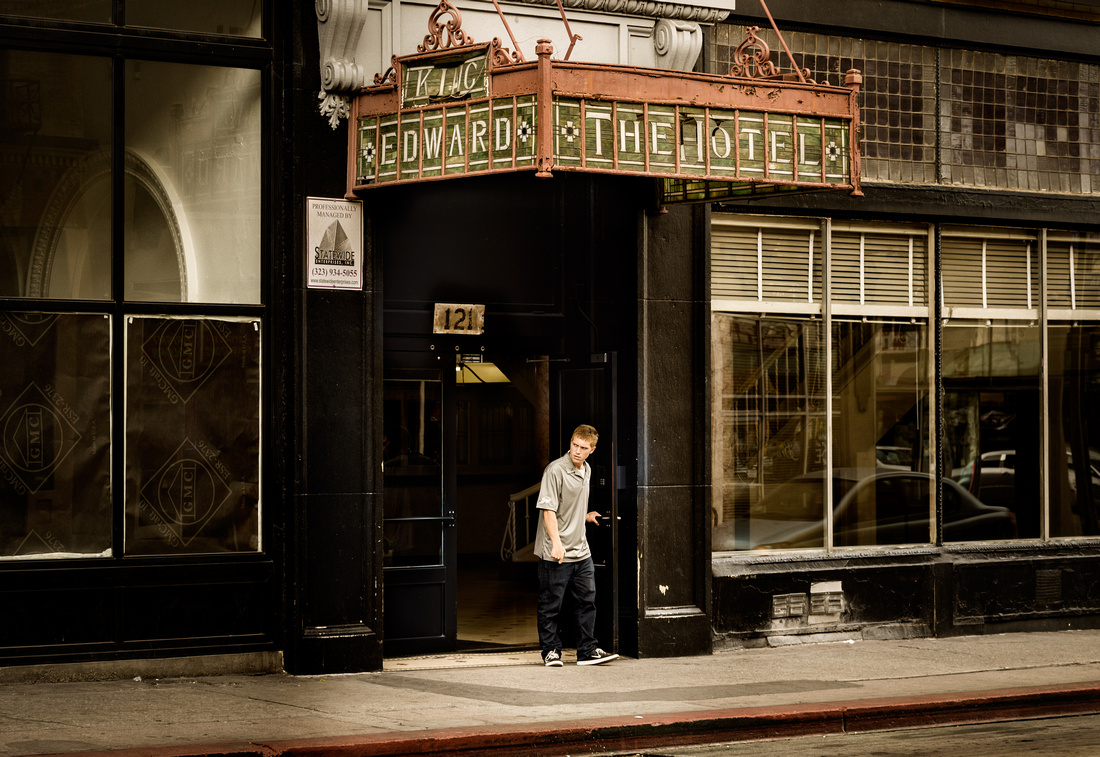 1960, I’m eighteen years old and the cops have just come through Billy Caponigro’s apartment and warned us that if we don’t get out of town we are all going to jail.  I’d like to tell you that it’s a phony beef but it’s not.  We’ve been causing a lot of trouble in the neighborhood and the cops know it.  We are me, Billy and…..another guy whose name I can’t remember although I try and I try.  He’s seventeen or eighteen too, his wife has thrown him out of their apartment and he has moved into Billy’s where we live on mattresses and couches and the radio is always playing.  We empty out the apartment, a first floor on Leland near Kedzie and load it into my car, a fifty Plymouth four door, faded grey.  There isn’t much to load.  Clothes, the canned goods we’ve been stealing from the grocery story, my tools and a few maps.  We are headed to California.

The trip takes five or six days driving pretty much non-stop.  None of us have ever been west of Joliet. The road is a revelation, highway 66 for thousands of miles.  We have adventures, breaking into a junkyard in the middle of the night to steal a generator we need to fix our car, seeing the Grand Canyon as dawn breaks, hanging a canvas bag filled with water from the antenna for the desert stretches, driving with the windows down and the hot air parching our skin and then coming into California to the unbelievable heat of Needles in summer, meeting some local kids and swimming in their pool not far from the railroad tracks while we wait for the darkness to come.

California is……………..unbelievable.  In the sweet evening air it all looks new and bright and modern, the super-sized gas stations and themed restaurants that line the road when you drive through the bigger towns, the everything that is not like Chicago.  Almost sixty years later I still feel the excitement, the thrill I felt as we drove through this different place on our way towards Los Angeles.

Los Angeles, dazed from days on the road, exhausted from taking turns sleeping in the back seat, bent from lying curled up amongst the dirty clothes.  More than anything I wanted a place to sleep and not be in the car.  We headed for downtown.  Downtown LA felt a lot more like Chicago, tall buildings, bricks and cement, traffic lights and tiny diners, lots of people.  We found a cheap parking lot, left our car and headed for a hotel we had spotted earlier, the King Edward.

I don’t recall what we paid but it couldn’t have been much.  Even in 1960 the King Edward was little more than a flop house.  It didn’t matter.  To me it felt special; a big had-been fancy place, a place where important people had once stayed.  The lobby remembered when it had been an expensive hotel.  In the room the furniture was old but the place was still finished with ornate moldings and the remains of good porcelain in the bathroom.  I remember how happy I was to be there.  I spent a little time looking out the window that faced out onto 5th street, watching the Los Angeles night, smelling the city air, imagining a life I might have here and finally drifting off to sleep.

In the morning I woke up first.  I dressed and slipped out of the room, went down to the lobby and walked out onto the street.  Somewhere close by I found a diner and ate breakfast sitting at the counter and reading my first L.A. Times.  Then I went back to the room where the guys were already up and waiting.  We gathered our things and got back in the car.  The guy I can’t remember wanted to go back home and so phone calls were made from corner phone booths and arrangements were arranged and we dropped him at the Greyhound bus station for the ride home.

That’s it.  Billy and I left that day driving up San Fernando Road, winding our way out of the city on our way to San Francisco.  When we got there he decided to go home too while I stayed, sleeping in my car until I got a job and then living in a cheap hotel on Powell St.

Other things happened, things I’ll tell you about one of these days but eventually I came back to LA, built a life and never went back to the King Edward again. Even so it stayed in the back of my mind.  When I looked at my future and it felt bleak I might say “well I can always go back to living that way, I know how to do that”  or “This is why I gotta quit screwing up, do I want to be living at the Eddy?”.  It became a marker of an earlier time for me, remembered both proudly and as a caution, a part of my life very different from the things that happened later.

I drove by the King Edward a few weeks ago, still standing in the seedy part of downtown.  It looks like the real estate boom is finally catching up with it and perhaps soon it will be lofts for young professionals but for now it stands there in the grit and the afternoon light much like it stood then.  I can no longer imagine living there but I can still remember the moment when I did.

Ermolay Romanov(non-registered)
Getting this down as another reason to fly westward, again, now over land rather than ocean. Not to escape once more, but rather to get back to something I forgot about.
No comments posted.
Loading...
Subscribe
RSS
Recent Posts
The Chicago Chop Suey Building Mystery Stories I've Been Meaning To Tell Yo Driving up to Kesey’s Farm The First Place I Ever Lived in LA Ghost Chicago - looking for things no longer here - Part two - Shaare Tikvah Ghost Chicago - looking for things no longer here - My childhood 29 Palms - Postcards from the Desert Landscapes and Dancers The shrine at Wavy Gravys Sometimes the lights all shining on me...
Keywords
Chicago sacred sixties Buddha Guadalupe hippie seventies Los Angeles Hollywood Park Chicago Chop Suey
Archive
January February March April May June July August September October November December
All images and text copyright Andy Romanoff© - all rights reserved
Powered by ZENFOLIO User Agreement
Cancel
Continue