Driving up to Kesey’s Farm

Tuesday, June 9th 1970.  I don’t always remember exactly when things happened but for once I have help.  That’s because I’m telling this story in memory of Terry Reim, onetime editor of the Berkeley Barb.  Terry was a fine traveling companion who recently left us for parts unknown.  When I heard of his passing there was a flurry of emails back and forth with his companion and his daughter and as part of that I was sent a portion of his journal.  A good thing because I’m never sure how much of what I remember is real and how much is even better.  In this case I get to tell you the story as I remember it but with the verification of Terry’s words freshly written in in 1970. Think of it as both of us telling you the story.  I think he would have liked that. 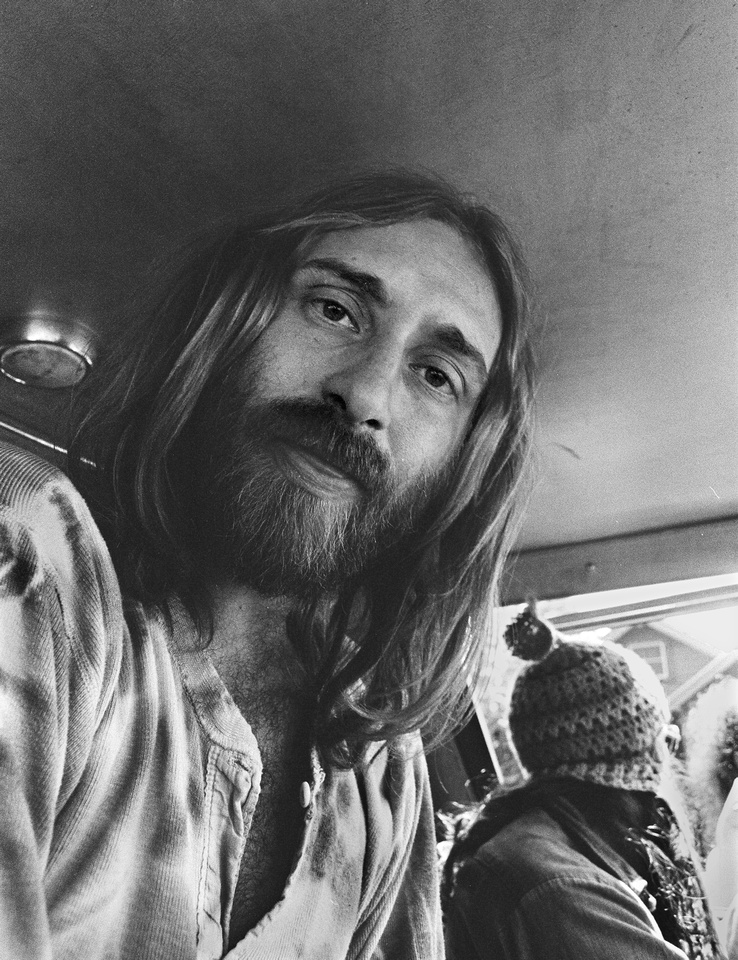 Terry Reim sitting in the van

Bobby Skye, Terry Reim and I got into the van and headed up to Oregon to visit Kesey at the farm.  Maybe only Terry and I were going up to visit, maybe Bobby was already living up there but I can’t fact check this one any more.  Kesey was a powerful totem for me, a mythic figure and the guy who had turned me onto Nitrous Oxide a year earlier. That introduction, sitting in the front of Road Hog the Hog Farm bus I was living on had opened my senses to psychedelics in a way nothing else had ever done.  Out of that visioned afternoon I had gained an alter ego, and I had taken on an alternate identity, Captain Gas; might as well pay Ken a visit. 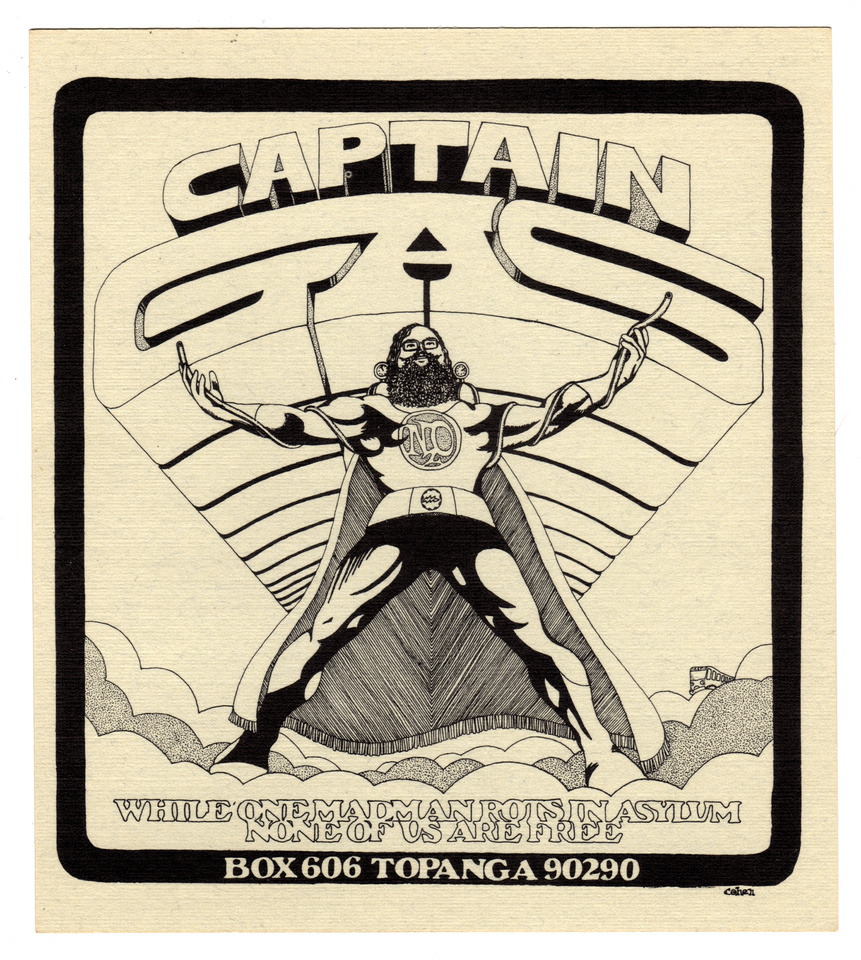 We headed out of San Francisco in Terry’s van driving up U.S.1 cruising along the coastline.

Terry writes - In Inverness we stopped to see Elf & On. “Don’t get caught in any Box Canyons,” Elf told us as we were leaving; but it did no good.

Somewhere along the way in the late afternoon we took some psychedelics, first Psilocybin and an hour later when we were sure the drugs hadn’t worked some acid.  Then the drugs kicked in and the day turned sweetly cosmic. We parked on a bluff overlooking the Pacific and walked along the cliff feeling the winds blowing and listening to the surf crashing below.  Then suddenly a big gust of wind grabbed my hat off of my head.  It went sailing out over the edge, and floated down till it landed on the rocks below, maybe fifty or sixty feet away but straight down and no way to get to it. Shit damn, what a fucking disaster!  That hat was totally part of me, beloved and unique and my companion along the way. I had to get it back. 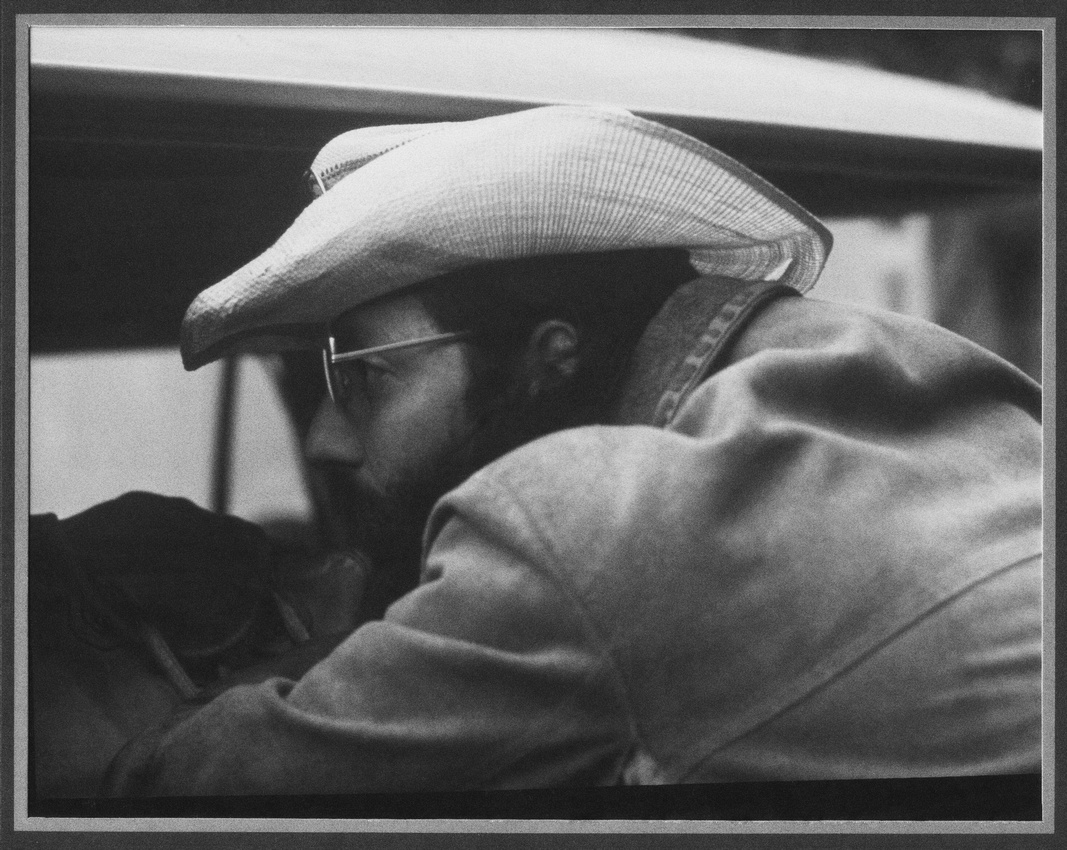 AR in hat-b&w - On the Road to Somewhere

A few hours later up Route1 we got out to piss at sunset by the ocean.  The wind caught Andy’s old battered straw hat and carried it about 50 feet down into a what? Yup, a Box Canyon.  “I gotta get that hat!” Andy yells and starts scaling down the side.  “Remember what Elf told us?” I yell back to him into the heavy wind, running about the rim as Andy heads downward. “It’s gonna be dark soon and you’ll never find your way out,” I say.  “I gotta get that hat – I’ve had it for years – that hat’s been with me everywhere,” Andy calls back up, “I gotta get it.”

“You have to know when to let go!” Sky yells down to him “let it be.” “It’s not time yet” Andy counters

Looking down at my hat through the acid it seemed possible I could climb back up but in reality, probably not.  The water came right in to the cliff face at the bottom and crashed on the rocks at the edge.  The bluff swept away from our position in an arc and then the ends disappeared.  The earth was soft, pieces of it would come away in my hand and it was steep…really steep.  I had to have my hat though so I started down...

It’s getting dark fast now, the wind is howling across the cliff. “We’re not going to convince him,” I yell to Sky, “so we might as well help.” “Wait a minute,” I yell to Andy, “I’ve got 100 feet of rope in the truck.  I’ll back it up and we’ll tie it to the bumper.” I back the truck up and Sky ties the rope to the bumper then lowers himself into the canyon.

In a minute we’re back on Route 1, hat in Andy’s hand, now on his head.  The acid and psilocybin zooming gently through our veins.

Bobby Sky (Steinbrecher) on the road to Eugene

I climbed back up and Sky headed down.  Even with a rope it wasn’t easy.  Sky grabbed the hat, stuck it on his head and clambered over the rocks looking for a way up.  When he found one he started climbing.  About half way up he stopped to rest for a minute, Terry and I waiting above, stoned and anxious.  A gull flew by hovering in the wind.  It came close to Sky, flew slowly by, and somehow it was all OK.  A few minutes later Sky was climbing over the top of the bluff and triumphantly handing me my hat.  We got back in the van and headed north.

Later that night of a new moon, we turned off the engine, the headlights, and Andy and I get atop the van lying down and looking up at the stars.  Sky’s at the wheel and brake guiding us silently down the mountain road in the dark.

A few hours later we were on a two lane road winding up through Redwood forests.  Something grand was playing on the radio.  Something good enough that as we crested the hill and the signal dropped away we turned back pulled off the road and sat their listening.  In the darkness the night was immense.  The trees towering over our heads touching the stars and the sky.  Terry and I grabbed sleeping bags and spread them on the roof, climbed up and lay looking into the cosmic night.  Everything was alive, soft and beautiful.  Sky got into the driver’s seat, started the van and slowly pulled us out onto the road.  As soon as the slope of the hill would carry us along he cut the engine and the lights and we coasted down the road.  As we drifted down it seemed the trees and the skies drifted along with us, part of our journey.  The breeze was part of us, we were part of it.  We were part of it all.

We drifted down the road for perhaps ten minutes, the only sound the shhh of our tires, no traffic, no talking, nothing but sensation.  I have been a lot more loaded but I’ve never been higher.  Finally, the road started to level out and when we had slowed to a crawl Sky pulled over and Terry and I climbed back in.

For years I had a few raggedy memories of all this, emotionally powerful but unreal enough that I didn’t totally trust it.  And now I have Terry’s corroboration written just three days after it happened.  Reading his version tells me that what I remembered was true enough and it fills my memory full of life. This thing really happened and it was important enough in the moment that he wrote it down and I remembered it for almost fifty years.

As I get older I think a lot about what we remember and why.  About the truth that slowly comes from the telling.  Having doubted it, it’s a pleasure for me to have this memory be trustworthy again.  When you come down to it memory is the edited version of our life.  What we keep about who we were and what we did and when.  Here’s one thing that happened

Warren B(non-registered)
Nicely written and shared thanks. I was a good friend of Terry. He was a sort mentor to me. Meet him as a student at Pacific High School. Terry was the directory. Can't quite grapple with his passing. He was a true spirit. Had a moral sense that went beyond his ego.
No comments posted.
Loading...
Subscribe
RSS
Recent Posts
The Chicago Chop Suey Building Mystery Stories I've Been Meaning To Tell Yo Driving up to Kesey’s Farm The First Place I Ever Lived in LA Ghost Chicago - looking for things no longer here - Part two - Shaare Tikvah Ghost Chicago - looking for things no longer here - My childhood 29 Palms - Postcards from the Desert Landscapes and Dancers The shrine at Wavy Gravys Sometimes the lights all shining on me...
Keywords
Chicago sacred sixties Buddha Guadalupe hippie seventies Los Angeles Hollywood Park Chicago Chop Suey
Archive
January February March April May June July August September October November December
All images and text copyright Andy Romanoff© - all rights reserved
Powered by ZENFOLIO User Agreement
Cancel
Continue